How to Make Chooch 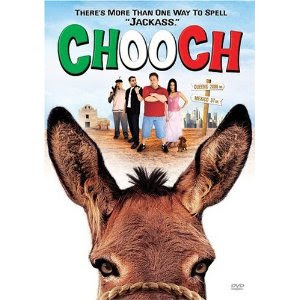 Say you are dying to make a low budget movie about a Queen's loser disparagingly nicknamed "Chooch", who gets abducted by thugs in a Mexican desert, then finds redemption by reuniting with his crew, including his beloved pet dachsund, as he endures a jail bust, donkey ride, chicken coop explosion, and a life-changing love affair at the local bordello? What would you do?

Well, the answer is easy if you run the New York State Pension Fund.

You hire a top Democratic fundraiser as rainmaker, then have him approach Wall Street investment funds with a "pay to play" offer - the investment funds indirectly produce "Chooch" in exchange for a fat allocation from the pension fund with a million bucks or so thrown in to grease the rainmaker.

And what if you were the head of the Wall Street fund that received a $100M investment three weeks after agreeing to distribute the low budget film on DVD? That's easy, you pass- go directly to become Obama's Auto Czar.

Of course, I could not have made this up if I tried. Also, here.

That's truly pathetic. I wonder why NY and California are always front-runners for the most farcically governed states?

BTW I hope to have an editorial out soon which looks at the phenomenon of "czars". If this example weren't so crazy, I'd include it, but I don't want to look like I'm cherry-picking my examples.

As we know, the more "progressive" a state is, the more farcical it has to be logically. In other words, the more government planning attempted, the more ridculous. NY and CA also have enormous budgets so lot's of money floating around, gigantic statist bureacracies within which to hide, and long histories dating back to the 19th century of graft and corruption. Of course, Boss Tweed/Tammany Hall in NY comes to mind and a friend told me recently about a book he was reading re California history that's insane. I would throw Chicago into the mix as perhaps the most corrupt city in the country but sure there are many contenders.

The more interesting point to me is how statism/central planning must lead to this kind of corruption. Socialism or the violation of property rights, immediately sets the state against the individual by definition. Since altruism is always the justification, at some point, the "common good" must ultimately come down to a bureacrat or committee who defines what that means. In the best case, a well-intentioned bureacrat does not have the capacity to decide this (since it is impossible) and in the worst case, individuals take advantage.

Of course, this is the history of all forms of monarchy, statism, socialism, communism, fascism, etc. Even on a micro-scale, where you hear about some hippie commune or cult, the leader will end up screwing all the wives, taking everyone's money, etc.