Two "Visions" of a Sustainable Future 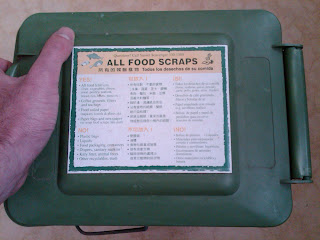 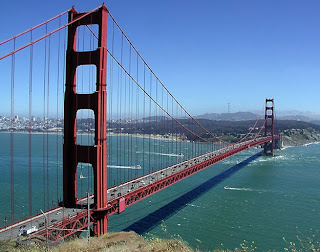 The top picture above was sent to me by a friend and shows a box he received under San Francisco's new "comprehensive mandatory composting and recycling law". Under threat of fines, the law mandates that he shovel unused food scraps into this "specially designed composting pail" ( a green plastic box). Allegedly, this is all part of an "aggressive push to cut greenhouse gas emissions and have the city sending nothing to landfills or incinerators by 2020." Quoting San Francisco Mayor Gavin Newsom:

"San Francisco has the best recycling and composting programs in the nation," Newsom said, praising the board's vote on a plan that some residents had decried as heavy-handed and impractical. "We can build on our success."

Note that this plan, which has individuals sorting through their garbage like medieval serfs to separate soiled diapers from food scraps, is regarded as a "success" to the left-wing environmentalist. Consider another environmentalist plan:

UN chief Ban Ki-moon visited Wednesday a vault carved into the Arctic permafrost, filled with samples of the world's most important seeds in case food crops are wiped out by a catastrophe.

"The world faces many daunting challenges today, one of the greatest of which is how to feed a growing population in the context of climate change," a bundled-up Ban told reporters after he toured the site in the Svalbard archipelago some 1,200 kilometres(745 miles) from the North Pole.

"The seeds stored here in Svalbard will help us do just that. Sustainable food production may not begin in this cold Arctic environment, but it does begin by conserving crop diversity," he said.

"This site, collated by all the countries, is really creative. I'm inspired by this vision to sustain the world in the future," he said.

Note, that collecting seeds in a frozen vault in the arctic is considered "creative" by environmentalists and this vault (Al Gore might call it a "lock box") represents their “vision of a sustainable future”.

It is never quite clear to me what environmentalists mean by "sustainable" so I googled it, and I found this definition:

Being sustainable is the goal of every environmentally conscious household and individual, because sustainability represents our ability to use Earth's resources to meet our present needs without jeopardizing the ability of future generations to meet their own needs.

To use one small example with mighty consequences, sending your seemingly harmless salad leftovers to an already overflowing garbage dump will force more acreage to be taken over by landfills. More methane gas from the decomposition will be released into the environment, creating a slightly hotter, more dangerous and smellier climate for your children. By composting your food leftovers at home, you can greatly improve your sustainability by keeping those leftovers out of the landfill.

First, if I think about eating a plant in a forest, but then I don't eat it, I don't have to compost it, but if I put it on my plate but don't eat it, I should compost it? What is the difference? Could I just pretend that I didn't intend to eat the salad on my plate and throw it on the ground just like the plant I didn't eat in the forest? In other words, what about all the trees and flowers that die in nature - do they count or just the ones I did not eat (or think about eating...)? Further, where exactly are these "overflowing garbage dumps"? Has it been proven that methane gas creates a hotter more dangerous climate? Has it been proven that a hotter climate is more dangerous? Also, I don't smell any garbage dumps. If I did, I would simply move away from the garbage dump so that I didn't have to smell it anymore. In summary, what the hell is she talking about?

Of course, environmentalists never trouble themselves with logic. The real message is stated in the last paragraph when the author claims that:

approaching lifestyle changes with the size of one's eco-footprint in mind requires willpower, but the payoff of a healthier lifestyle and a happier planet is well worth the extra effort.

How can the planet be made "happier" since it is a ball of dirt? This is not a facetious question. Note, this anthropomorphication of the earth (ascribing human features to the earth) is not a charming little device intended to make a point. It is the essence of environmentalism. They literally regard the earth as a living entity, a deity to be worshiped and valued intrinsically, i.e., valued apart from man. However, since man must reshape the earth to survive, i.e., he must impinge on their deity, they must regard man as intrinsically evil. This concept is the environmentalist religion's form of Original Sin, popularly known as "eco-footprint". Consequently, their job, like Catholic priests, is to admonish the wicked to minimize their intrinsic imperfection or eco-sin in order to gain favor with Mother Earth and save future generations (the environmentalist version of the hereafter). Just as the religious offer sacrifices to gain favor with God, the environmentalist lives a life of self-abnegation, self-sacrifice and composting.

While capitalist entrepreneurs seek to invent medicines to destroy viruses and cure cancer, environmentalists regard man himself as a virus to be eradicated or a cancer on the planet which they seek to send into remission. Consequently, the environmentalist seeks to restrict technological progress in favor of bugs and swamps. They urge you to conserve, limit, restrict, recycle, and downsize. They fantasize about a global government empowered to centrally plan a man’s every waking breath. They rail against the “exploitation” of corporations which produce life enabling products while promoting the suicidal policies and apologizing for the bloody atrocities of socialist dictators like Stalin, Mao, Chavez and Castro.

The environmentalist concept of sustainability does not mean lengthening or prolonging man's life. It means the exact opposite. Policies that deny, restrict, and curtail human progress can not result in actual sustainability. Such policies result in privation, misery, and death.

What would actual sustainability entail? First and foremost, sustainability requires a standard of value based on human life not the impossible and meaningless standard of a "happier planet"! In order to prolong man's life, one must consider the requirements of man's survival, and what has sustained mankind for tens of thousands of years? The human mind.

Production is reason applied to the problem of survival. Reason and productivity are requirements of man's survival, and when government is strictly limited to protecting individual rights, i.e., the freedom to think, produce, trade, and own property, men produce in abundance because the limits of the human mind are boundless. The history of capitalism proves that to the extent men are free, man prospers, his life expectancy grows, and the quality of life improves dramatically. Consider the benefit to our lives from computers, air travel, refrigeration, microwave ovens, indoor plumbing, automobiles, cell phones, personal hygiene products, genetic engineering, pesticides, medicine, and vaccines to name a few. Man's mind is an infinite resource.

My vision of a sustainable future is one in which freedom, individual rights, and capitalism is adopted around the world. It is a future where billions of people are free to produce, innovate, and voluntarily trade unshackled from the yoke of statist dictators and leeching bureaucrats who strangle innovation and production. Consider the untold technological progress that would follow from such a system. Imagine new life prolonging medicines, new sources of energy, or the colonization of space.

The pictures at the top of this post dramatize these two warring visions. One picture represents retrogression back to the life of an ignorant peasant sorting through trash and hiding seeds in bunkers passively awaiting a prophesied global apocalypse. The other is a picture from another part of San Francisco. The Golden Gate bridge represents reason, production, progress, and human happiness. It represents true creativity and more importantly, true sustainability - the kind that follows from a moral philosophy which holds man’s life as the standard of value.

Let's say you accept the argument that there is a negative global ecological impact created by some activity, AND that you accept that it is a resource in common that cannot meaningfully be subjected to property rights (like the air). To the bureaucrat problem = need-to-act. Even if the action can't possibly solve the problem.

In the global warming debate (ignoring the science), they will say there are x-billion-metric-tons of CO2 added per year. They will then propose an action that affects .000001% of that CO2. even though there is no conceivable reality in which the solution will make any appreciable difference they will say that "at least we are trying to do something".

The seem to think that "trying" is in important. As though there is some global nannny-god giving them brownie points for coming in last. This is what happens when you place feelings about something over reason.

That's a great observation. Another aspect to this is the belief that a certain scientific fact necesitates a certain government response as in "global warming is happening - therefore the government must take over the economy immediately". The science does not imply a certain response and is a separate issue.

The general point that government "action" is necessarily good follows from pragmatism and altruism.

People clamor for "action" and politicians respond with calls for "consensus" and coalition building, etc. There is never a discussion of the underlying principles pertaining to individual rights or the laws of economics. They view that as extremist ideology which stands in the way of "getting something done". If there are no principles then how do they act? They absorb altruism-collectivism from the culture which implies statism and government intervention among other things. Therefore, a need for action is equal to government intervention and individual sacrifice.

After decades of this kind of thinking I think it even works in reverse where any proposed government action is seen to be necessarily good simply because it is action. Also, logically, regulation causes more disasters which necesitates further intervention, etc.