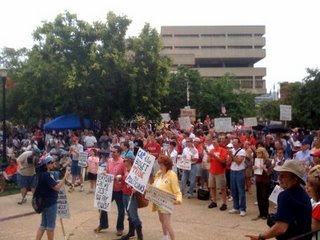 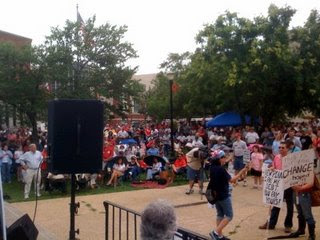 I am very happy to report that I was able to give my speech (posted here) to about 1000 people. I would like to thank Wendy Caswell and her group http://www.louisvilleteaparty.org/ for holding the event which was a tremendous success. My colleague, George, and I hosted a table and were able to pass out well over 100 Ayn Rand samplers which were sent to us by the Ayn Rand Institute who connected us with the event organizers. We also formed a mailing list with the goal of forming a local Objectivist group.

The Tea Party movement is an eclectic mixture of individuals and organizations. Although there are certainly differences in philosophy and priority, what unites this movement is outrage over the rapid erosion of individual freedom amid the extraordinary growth of government and a desire to reassert the Founding Father's philosophy of a government constitutionally limited to securing the right to life, liberty and the pursuit of happiness. The challenge will be to harness this outrage and channel it into a coherent and rational program.

Rather than complain about this eclecticism or divergences in philosophy, Objectivists should see this as an opportunity to reach like minded individuals who may not fully appreciate the role of fundamental philosophy or the need for a rational, secular defense of freedom and capitalism. As I have argued before, our battle is with the right not the left. We are not going to persuade Barney Frank or Noam Chomsky that we are right. Their minds are wrecked. We can convince people already sympathetic to the American ideals of individualism and limited government.
This movement needs leadership. Many sense something is drastically wrong but do not have the intellectual ammunition to win this battle. Without properly understanding the rational, moral case for capitalism this movement will fail for the same reason the American right has been failing for generations. When the right can proudly and unapologetically assert the right to our lives and property we will win.
The Tea Party movement has just begun. There are legions of Ayn Rand admirers who have had generations to digest her revolutionary philosophy. Objectivism has a presence in academia. We have prominent Objectivists appearing on national television and in the national media on almost a daily basis. Let's provide the leadership and the intellectual ammunition that the right so desperately needs.
Posted by The Rat Cap at 1:49 PM

Doug, congratulations on your accomplishments. I know from experience what it takes to do what you have done: Take the initiative to speak; prepare a speech; and deliver the speech. Few will ever do what you have done. You have gone further by also distributing literature and interacting with individuals who might have active minds.

Though, based only on narrow experience locally, I doubt that the potential of the Tea Party movement justifies a great investment by Objectivist activists, I applaud the attempt by those Objectivists who have chosen this form of activism. If nothing else, it could be a learning experience.

Speaking of which, I have found--in business and in personal endeavors--that having (1) goals and (2) predefined measures of success are crucial to being effective, as well as learning from one's experiences.

I have a rhetorical question, for anyone: For those working at Tea Party events or actually working with the Tea Party organizations:

- What goals have you set for yourself?

- What measures of success would you define now so that later you can objectively assess your effectiveness?

I can suggest one organizational goal: The Tea Party organization targeted will within one year have a Statement of principles; all those principles will be objective; the principles will be clearly written and will include even-handed examples--for instance: abolition of the income tax and abolition of all narcotics laws; and recognition of the right to own weapons powerful enough to protect oneself until police arrive at the scene of an emergency and the abolition of all restrictions on abortion.

The purpose of the latter examples, of course, is to prevent the false "progress" of appealing to a crowd only on the basis of what they already support rather than on the basis of a consistent application of a principle.

Thanks for the kind comments and for the great points re effectiveness.

It will take some time to digest this but I have a few thoughts for you and others to consider.

I don't see the Tea Party itself becoming a direct force. I see it as a forum for different but like minded groups to advertise themselves and be a recruiting ground for further action.

My first goal in doing some of this work is just to let people know about Ayn Rand. I am not going to convince anyone in a 5 minute speech or at a table of my philosophy. I can interest them enough to read a sampler or go to a website for more.

The whole premise of my 5 minute speech was not to "convince" anyone. My goal was to create a contrasting image in people's mind: the image of a strong, efficacious Greek God and the image of a pile of shit and to attach the Greek God to my ideas so to speak. I then mention Ayn Rand's name any way possible with the message that there is something fundamental to this more beautiful message and they need to find out more.

We passed out well over a hundred samplers, and I was able to get over 20 people to sign up for a local Objectivist club which I intend to do. I would never have had that chance and that kind of response without the Tea Party event. Hopefully, this group will be active locally in terms of educating others, sponsoring our own events, and taking political action where possible.

This movement is a chance for Objectivists to inject our ideas into the general right wing marketplace. It's surprising but there are many on the right that have never even heard of Ayn Rand. We should not assume that these people are closed to new ideas. On the contrary, the right is begging for leadership and direction.

In Kentucky, Rand Paul (the son of Ron Paul) is running as a Republican for U.S. Senate. There is a larger movement within the Republican Party being conducted by a national PAC "Campaign for Liberty" which is trying to move the Republican Party toward let's call it "libertarian" political policies although I know that term is charged. (The reason I am interested in following and possibly supporting his campaign is that he is running as a Republican and not as a Libertarian.) This race will attract national attention and he appears to be be a pretty good candidate. The Tea Party offers a forum to encourage other candidates and those seeking political office that there is a huge constituency of those that support individual rights and limited government.

There is a grass roots radio station that is looking for content and funding and many other groups.

If the colonists had tried to revolt against Britain in 1740, they would have failed. There was not critical ideological mass. By the time of the 1760's, there was and history speaks for itself. When is it time? The right is shaken and looking for a new direction. I think the Tea Party is an opportunity to inject undiluted ideas into the mix. We need to constantly ask ourselves the questions you are asking and we should have a plan. History will be the judge if we are successful.

Doug: Echo on your support for Rand Paul. The other candidate I know of who is participating in the Campaign for Liberty / Republican push is RJ Harris, a US Congressional candidate from Oklahoma. He and Rand Paul have endorsed one another.

Congratulations on your excellent speech. I'm in complete agreement with you that the Tea Party movement is a great opportunity for Objectivists to have a serious impact on events. Objectivists who have been sitting on the sidelines need to get up and get busy. Many people at these rallies are desperate for intellectual leadership. They are tired of Republican compromises and "libertarian" wonks.

That's great about RJ Harris - we need to keep our eye on Campaign for Liberty. This represents a chance for Objectivists to be heard in a mainstream political party. Yes, it is not perfect but let's try and influence this movement as it forms and expands.

Thank you for compliment.

You said: "Many people at these rallies are desperate for intellectual leadership. They are tired of Republican compromises and "libertarian" wonks."

"Rather than complain about this eclecticism or divergences in philosophy, Objectivists should see this as an opportunity...."

Bravo on your activism, and you are exactly right. The Tea Party rallies are a profound *educational* opportunity, because those who show up are extremely motivated yet are given almost nothing to *think* about. It is a void waiting to be filled. So rather than despair that some conservative ideas appear in this vacuum, I handed out 50 ARC flyers in Oregon calling for the separation of economy and state. Next time I'll take 200. It is easy to do and in a sense it is the *most* I can do, politically: get ARI's and Ayn Rand's printed words into the hands of individuals concerned about the loss of freedom.

"I handed out 50 ARC flyers in Oregon calling"

Where? When? What event?

Chris, I handed out the ARC flyers at the 4th of July Tea Party rally in Hillsboro, see http://oregonteaparty.com/ Yes, most Portlanders would not be receptive to talk of separation of economy and state, but Tea Partiers are. Not a single person I approached expressed anything negative to me. It was a fun and inspiring day.

The next Portland rally will be in September, apparently. Let me know if you are interested in coordinating on handing out ARC flyers there too, the crowd will probably be in the thousands. I'll be communicating with the rally organizers about what I plan to do.

I have a friend who is in Portland and excited to hear about the tea parties, etc. and you guys appear to be there too. If you want to chat/meet, send me an email at ratcapblog@gmail.com and I will put you all together.