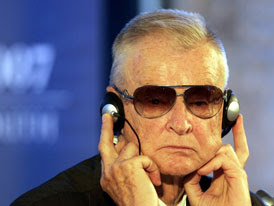 I think the next president should say to the world that the United States wants to be part of the solution to its problems not in part the maker of the problems. I think the president has to say very credibly and forcefully to the American people that to do that- what I just said - the American people have to think hard about their definition of the meaning of the good life - that the hedonistic, materialistic society of high levels of consumption - increasing levels of social inequality is not a society that can be part of the solution of the world's problems.

In the 1980 science fiction film, "The Final Countdown", a modern American nuclear aircraft carrier goes through a supernatural storm which thrusts it back in time to 1941 just before the Japanese attack on Pearl Harbor. Now, there have been some storms in my area recently, and I have the sneaking suspicion that we too have been thrust back in time - not to 1941, but to circa 1979 at the nadir of the Carter presidency.

As Gus Van Horn very nicely details, our president is gallivanting around the world apologizing and kowtowing to our enemies, blaming America for the world's problems, and "anachronistically" calling for nuclear disarmament while announcing cut backs in our own missile defense. Meanwhile, Iran threatens American interests with impunity, a hostage crisis tops the headlines, and the President's combination of Keynesian and Marxist economic policies destroy the economy inducing an environment of anger, confusion, and malaise. I fully expect Obama to reveal a beer guzzling brother named Billy and for the U.S. national soccer team to upset its superior competition in the upcoming World Cup, an outcome we could lovingly dub "The Miracle on Turf".

In a past post titled Carter, The Elders, and Treason related to Carter's end run "negotiations" with the Palestinian terrorist organization, Hamas, and his involvement in The Elders, a group of prominent socialists dedicated to a world government, I said:

The name "Jimmy Carter" has reached a rare level in my consciousness. It is a name that, for me, instantly provokes a visceral sense of disgust and apprehension similar to the reaction caused by the names: Hillary Clinton, Barbara Streisand, or Jane Fonda. I groan when I see a picture of him or see a headline with his name. His presidency and persona is rightly associated with a general aura of malaise, and he exudes a kind of mushy, self-righteous, amorality. Then, whenever you think he has been discarded into the trash heap of left-wing imbecility, he surfaces, like a pesky apparition to taunt you with his latest outrage.

Although Carter himself has been on the relative DL as of late, unfortunately, his National Security Advisor, Zbigniew Brzezinski, appears to be directly involved in advising the administration and the Democratic Party at large on foreign policy. If you can stomach it and/or stay awake, I encourage you to trudge through the following Charlie Rose interview from last week in which he interviews two men who perhaps more than any others, exemplify the modern intellectuals' allegiance to the philosophy of pragmatism and who have haunted the American foreign policy establishment for over 40 years - Zbigniew Brzezinski and Henry Kissinger. (While watching them, the first thing that came to mind was Statler and Waldorf - the two old men in the balcony in The Muppet Show.) If you can isolate one statement in which either one says something that clearly means anything, I will give you "the reader of the week" award (which could also be changed to "masochist of the week" award).

One of Ayn Rand's brilliant insights was that under collectivism, technology and human progress actually regress. Unlike other dystopian novels such as Orwell's 1984, Ayn Rand's novella Anthem takes place in a future totalitarian Dark Age in which electricity must be rediscovered by the protagonist. As African pirates seize American ships, an occurrence which hearkens back to America's Barbary Wars, when North African pirates exacted tribute from American cargo ships and a relatively navy-less American military was powerless to stop them, and as Obama's science advisor dreams up science fiction "solutions" that dredge up the era of fatal central planning fiascoes like Mao's "Great Leap Forward", and as the American president replays the mistakes of America's recent Dark Age, we should be reminded of Rand's lesson.
Posted by The Rat Cap at 11:24 PM

you asked for obama to have a scumbag brother embroiled in scandal? ask and ye shall receive:

Very good Dennis Millerian rant. I find the method of the diatribe very useful myself.

Re Obama's brother - I would bet the farm on the U.S. soccer team

ML, I'm a fan of Miller so thanks for the compliment