Golf Clap for The "Dear Leader" 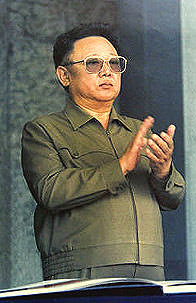 Pyongyang media say Kim enjoys golf, having shot multiple holes-in-one during his first try at the game. He reportedly aced five holes and finished 38 under par on the golf course. The "Dear Leader" routinely shoots three or four holes-in-one per round, the government-controlled media reported.

I'll have to get the name of his instructor. Of course, this brand of bizarre, self-aggrandising propaganda is typical of all dictators. Associated with these megalomaniacal pronouncements is the notion that the dictator is a sort of omniscient caretaker, a Platonic philosopher king who alone can access truth. Such pretensions are the hallmark of the "central planner".

For example, a colleague sent me some links related to Chinese communist dictator Mao Zedong's "Great Leap Forward", a plan to industrialize and collectivize agriculture in 1958. His plan, which resulted in the death of millions from famine, included the "Great Sparrow Campaign" under which "every person in China was given a fly swatter under the directive "Away with all pests!":

The Great sparrow also known as the Kill a sparrow campaign, and officially, the Four Pests campaign was one of the first actions taken in the Great Leap Forward from 1958 to 1962. The four pests to be eliminated were rats, flies, mosquitoes, and sparrows.

Sparrows were included on the list because they ate grain seeds, causing disruption to agriculture. It was decided that all the peasants in China should bang pots and pans and run around to make the sparrows fly away in fear. Sparrow nests were torn down, eggs were broken, and nestlings were killed.

Unfortunately, this plan had a few problematic side effects:

With no sparrows to eat them, locust populations ballooned, swarming the country and compounding the problems already caused by the Great Leap Forward and adverse weather conditions, leading to the famine.

That wasn't the only problem. Another Mao "innovation" which exacerbated the starvation was the concept of "deep plowing":

On the communes, a number of radical and controversial agricultural innovations were promoted at the behest of Mao. Many of these were based on the ideas of now discredited Soviet biologist Trofim Lysenko and his followers. The policies included: close cropping, whereby seeds were sown far more densely than normal on the incorrect assumption that seeds of the same class would not compete with each other; Deep plowing (up to 2m deep) was encouraged on the mistaken belief that this would yield plants with extra large root systems; Even more disastrously it was argued that a proportion of fields should be left unploughed.:

And how did the party officials react when the plan failed?:

Although actual harvests were reduced, local officials, under tremendous pressure from central authorities to report record harvests in response to the new innovations, competed with each other to announce increasingly exaggerated results. These were used as a basis for determining the amount of grain to be taken by the State to supply the towns and cities, and to export. This left barely enough for the peasants, and in some areas, starvation set in. During 1958–1960 China continued to be a substantial net exporter of grain, despite the widespread famine experienced in the countryside, as Mao sought to maintain face and convince the outside world of the success of his plans.

Note that rather than addressing the causes of the famine or actually taking real action to alleviate it, the leaders continually lied and focused on saving "face", i.e., blatantly evading reality in the hope that others would perceive them as having achieved something real. Sound familiar?

Keep this all in mind when you consider the following article which reports:

John Holdren told The Associated Press in his first interview since being confirmed last month that the idea of geoengineering the climate is being discussed. One such extreme option includes shooting pollution particles into the upper atmosphere to reflect the sun's rays. Holdren said such an experimental measure would only be used as a last resort.

"It's got to be looked at," he said. "We don't have the luxury of taking any approach off the table."

Given that meteorologists can not predict the weather accurately past about 24 hours, is anyone else nervous about shooting particles in the air to block the sun's rays? Holdren notes his concern:

But Holdren noted that shooting particles into the air—making an artificial volcano as one Nobel laureate has suggested—could have grave side effects and would not completely solve all the problems from soaring greenhouse gas emissions. So such actions could not be taken lightly, he said.

So, this might result in "grave side effects" and would not "completely solve all the problems" but:

Still, "we might get desperate enough to want to use it," he added.

Another geoengineering option he mentioned was the use of so-called artificial trees to suck carbon dioxide—the chief human-caused greenhouse gas—out of the air and store it. At first that seemed prohibitively expensive, but a re-examination of the approach shows it might be less costly, he said

I'll just take a fly swatter and a pan.

Great post! This really nails it, with the very clear parallels between Lysenko/Mao/Kim and the insanity of Holdren and his ilk talking about shooting sulfur particles into the atmosphere to block the sun.

They can't predict the weather, but they know that we're near a catastrophic tipping point, such that this is a "option worth exploring."

Thanks for comment and the mention at your blog: Titanic Deck Chairs