Knowledge in a Bottle

So many take modern medicine for granted, and one of the greatest tragedies of modern times is the extent to which the field has been strangled by government intervention (the European Working Time Directive is but a sample of what's coming soon to an American doctor near you). The number of doctors that have retired early or left the field in frustration and the number of brilliant minds that will never enter the field can not be calculated. Pharmaceutical companies who provide life saving cures on a daily basis are routinely vilified and threatened rather than honored and revered.

The history of medicine, like the history of any science, is long and arduous. What so many take for granted is the culmination of over 2,000 years of human effort. Just to get a small sense of this history, consider the picture above of Thomas Eakins' painting The Gross Clinic (1876) which I had recently posted in my sidebar. I found some further fascinating background on this picture:

This is an interesting period because anesthesia had been in use for 14 years when the war began but the concept of antisepsis would only appear two years after its end. At the beginning of the war, the US Army was tiny and scattered and the medical corps was in the hands of incompetents. For example, they had provided no textbooks to save funds. As the war began, Samuel Gross, a professor of surgery in Philadelphia, wrote his own textbook of military medicine in nine days. It was copied by the Confederates in 1863 and became their medical “bible” as well.

This painting of Gross in his surgery clinic is one of the most famous of American medical paintings. The procedure was one of draining an infected femur. Surgery in America, or anywhere else, in 1860 was very basic and few sophisticated procedures were even contemplated. You might also note the absence of any attempt at antiseptic practice. There are no gowns or gloves and the thought that contamination of the wound was a hazard was unknown.

Here is some more background from wikipedia:

Admired for its uncompromising realism, the Gross Clinic has an important place documenting the history of medicine—both because it honors the emergence of surgery as a healing profession (previously, surgery was associated primarily with amputation), and because it shows us what the surgical theater looked like in the nineteenth century. The painting is based on a surgery witnessed by Eakins, in which Gross treated a young man for osteomyelitis of the femur. Gross is pictured here performing a conservative operation as opposed to an amputation (which is how the patient would normally have been treated in previous decades). Here, surgeons crowd around the anesthetized patient in their frock coats. This is just prior to the adoption of a hygienic surgical environment (see asepsis). The Gross Clinic is thus often contrasted with Eakins's later painting The Agnew Clinic (1889), which depicts a cleaner, brighter, surgical theater. In comparing the two, we see the advancement in our understanding of the prevention of infection.

Here is a picture of The Agnew Clinic referenced above: 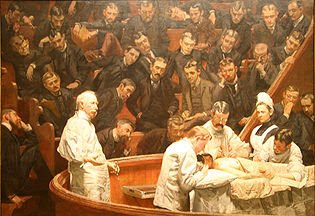 From these two paintings, one could see the rapid progress that began taking place in the 19th century. Going further back, here is a picture of Rembrandt's The Anatomy Lesson of Dr. Nicolaes Tulp painted in 1632: 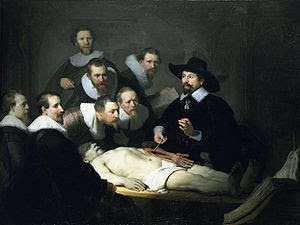 This was painted only about 16 years after British physician William Harvey's monumental discovery of the function of the heart and pulmonary circulation (Harvey pictured below). This picture represents the state of medicine only 250 years earlier. Although medicine had certainly progressed, when viewing these 3 pictures, its fairly clear that medicine had not changed all that much relative to the kinds of exponential changes we have experienced in the last one hundred years. This fact should make us even more grateful for the medicine of today. 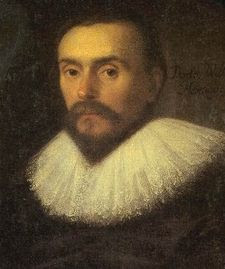 Another tragedy is the loss of 1,000 years of potential scientific progress due to the Dark Ages. During the 2nd Century A.D., while the mystic Christian cults via Platonism were beginning their spread through Rome and laying the groundwork for the eventual end of the classical Greek and Roman tradition - the great Roman physician Galen (pictured below) was researching and writing texts which would dominate the field for over a thousand years. As the West descended into the Dark Ages, Galen's texts were kept alive by Muslims and translated into Arabic. However, due to religious prohibitions on dissection, the Muslim's lacked interest in anatomy and did not advance his work significantly. It wasn't until the twelfth and thirteenth centuries, at the dawn of the Renaissance, that interest in anatomy was revived and Galen's works once again translated. However, as Marie Boas in The Scientific Renaissance 1450-1630 writes:

The real worship of Galen begins with the rediscovery of the Anatomical Procedures, and its commentary by Guinther (in 1531). 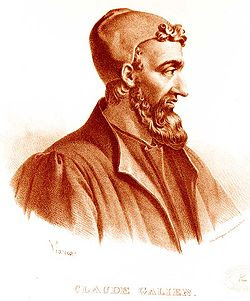 Andreas Vesalius, considered the founder of modern anatomy, would publish his famous De Humani Corporis Fabrica (On the fabric of the human body) in 1543, "known for its highly detailed illustrations of human dissections often in allegorical poses" (see picture below). Underscoring the loss of a thousand years during the Dark Ages, Vesalius would write (see Boas):

those who are now dedicated to the ancient study of medicine, almost restored to its pristine splendour in many schools, are beginning to learn to their satisfaction how little and how feebly men have laboured in the field of Anatomy from the time of Galen to the present day." 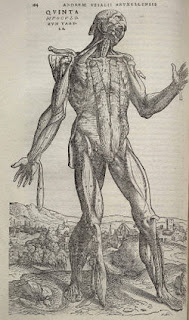 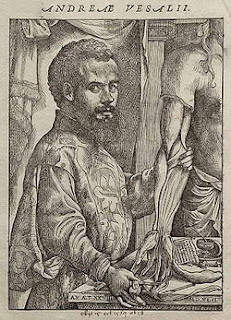 Incidentally, I ran across this link describing a gift from Pfizer to the University of Michigan:

More than 50 years ago, a Michigan-based pharmaceutical company commissioned a Michigan painter to depict dozens of great moments in medical history, from ancient Egypt to the United States in the 20th century.

Within a few years, the entire nation knew the paintings by Robert A. Thom. Reproductions appeared in magazines and doctors’ offices, and a book of them was given to thousands of new physicians. With a Norman Rockwell-style realism, the works epitomized the optimism of the time in which they were painted, and the nation’s faith in post-World War II medical and scientific triumphs.

A link to some of the paintings is here.
In closing, let me say that it always angers me when I hear people complain about the "cost" of drugs. Put aside the fact that government intervention causes drug prices to be higher than otherwise, and consider that in one antibiotic pill or in any of thousands of other medications there is condensed over 2,000 years of human effort and knowledge. All for what, usually 50 bucks or so? Please. This is a steal. The idea that altruism or self-sacrifice is the standard of morality is at root responsible for the hostility to freedom and capitalism - the system that acknowledges and protects the individual pursuit of happiness. Altruism and its consequence, government controls, not only rob the producer's of their livelihood and those that will never benefit from efforts never made, it robs people of a more subtle value. It takes from them the joy of appreciating and admiring human ingenuity. It substitutes a sneering contemptuous demand that others slave for their benefit, in the place of what should be a simple acknowledgement of a profound value - the value of exchanging 50 measly bucks for their life.
Posted by The Rat Cap at 9:38 AM

Good post, Doug.
There are far too few reminders of just how many shoulders support our civilization. Thanks.
As an aside, doesn't it say something about a persons evaluation of their own life's 'worth' when they expect someone else to pay to sustain it or begrudge the $50 needed retain that life?
gary seinen

thanks both for the kind comments.

Gary, the point you made led me to a new post idea. There is a lot to what you said. Thanks much

RE: Altruism and its consequence, government controls, not only rob the producer's of their livelihood and those that will never benefit from efforts never made, it robs people of a more subtle value. It takes from them the joy of appreciating and admiring human ingenuity.

A poignant summary of the tragedy of altruism. Thanks for your effort to reclaim the that which should be ours.

Knowledge of bottle is given to the public for the exact use in different dimensions. All the routine works have been ensured for the establishment of the new room of the products for the people.

Good Way Of Telling, Good Post To Take Facts Regarding My Presentation Subject Matter, Which I Am Going To Deliver In My College Cheat Online Exam